As part of our healthy lifestyle, we've been cooking differently.  We made this recipe the other week.  Here's the link to the recipe https://tasty.co/recipe/roasted-shrimp-veggie-salad.  We didn't make it as a salad, but over zucchini noodles as you'll see below. 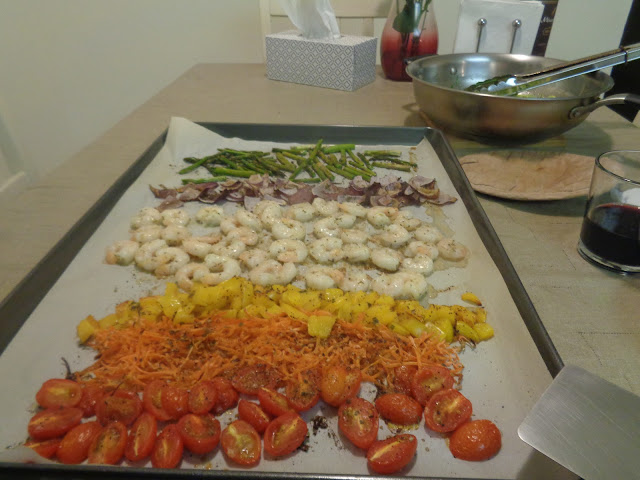 And the veggies before they go into the oven to cook for about 10 minutes. It looks like a lot of veggies, but in reality it is 1 cup of cherry tomatoes, 1 cup of shredded carrots, one yellow pepper, 1/2 of a red onion, and 1 cup of asparagus. 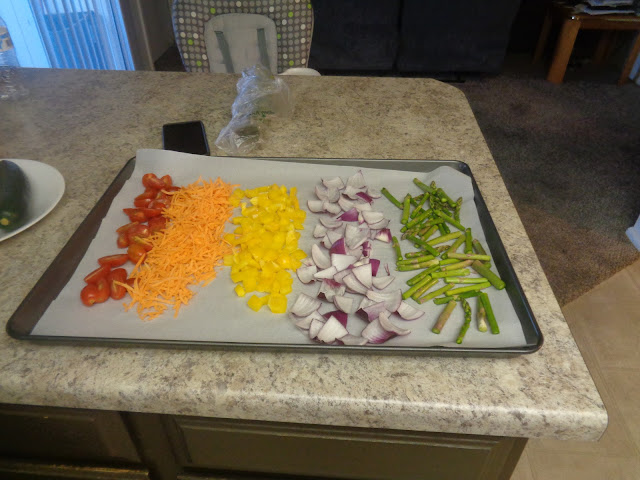 The veggies after they have cooked for 10 minutes. You separate them because you are going to put the shrimp in the middle. 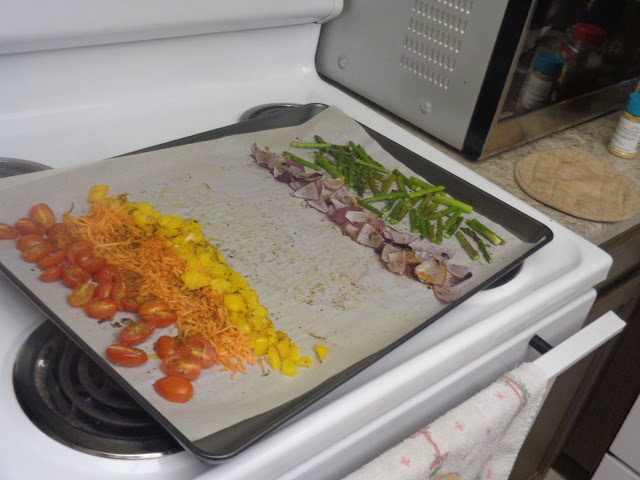 The recipe calls for uncooked shrimp.  We just used the cooked ones and cooked them for a shorter period of time (like 3-5 minutes I think). 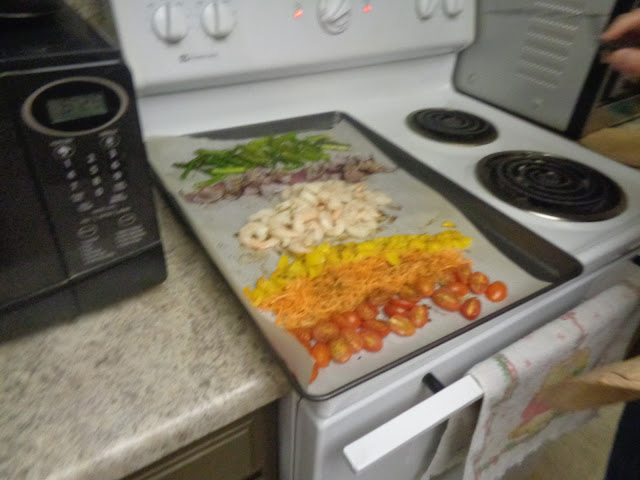 We've been trying to avoid rice or pasta.  I saw already made zucchini noodles at the store but they were really expensive.  So imagine my delight when we saw this at Bed, Bath and Beyond.  It was under $10.  We were skeptical if it worked or not.  It does. 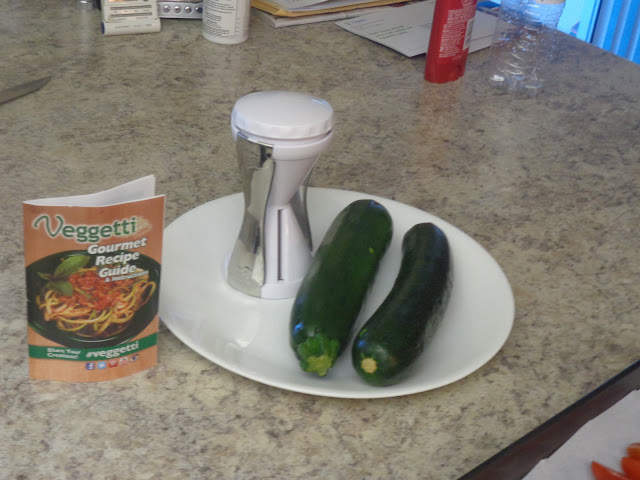 We did 2 zucchini as you see above.  You just put the zucchini inside the Veggetti and start twisting the handle. 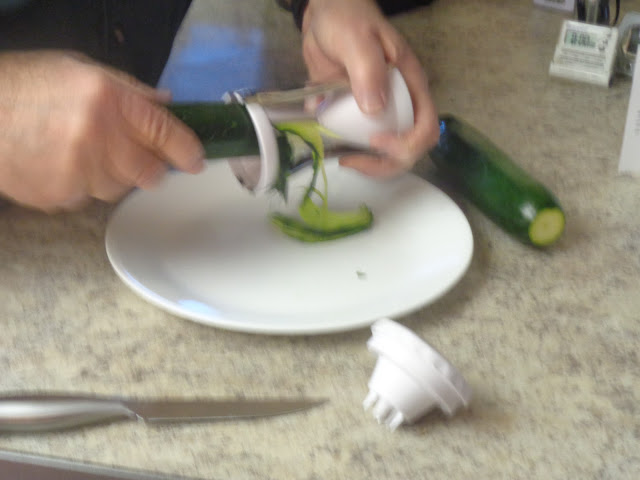 Noodles come out like you can see.  You can have them thin or thick.  We choose thick.  When you get to the end of the zucchini you attach the top of the Veggetti to the zucchini and continue on twisting, so your fingers are safe. 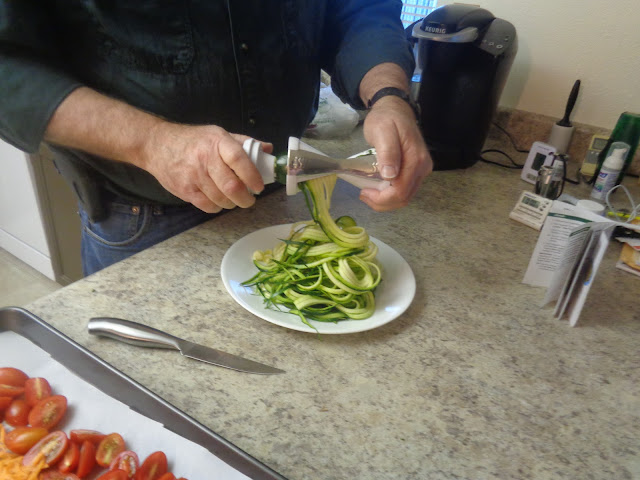 This is what 2 zucchini produced in the way of noodles. 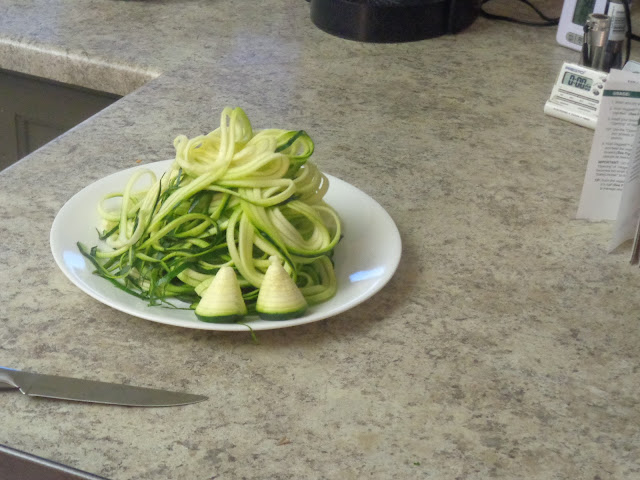 Hubby cooked them in some olive oil and added some spices (I think Italian spicing and garlic powder based on what I see on the counter) and cooked them for about 2 minutes, which is what they recommend in the book that comes with the Veggetti. You don't want to overcook them and have them get mushy. 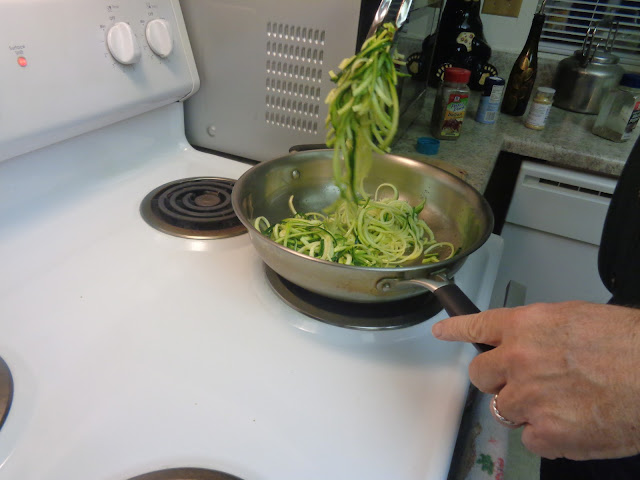 And that was that! Simple to put together.  Delicious to eat.  We used 12 ounces of shrimp instead of the pound the recipe called for.  All total, I'm thinking the servings were less than 400 calories each (we did eat it all in one setting, but again though the veggies look abundant, they were in small quantities).

We had enough veggies left over that we made it again the following week and again it was delicious.
Posted by betty at 8:33 PM 21 comments:

Things I learned this week

Yep, even at the age of 61 I can still learn new things.

I learned, as I'm sure a lot of you have learned or know, that truly cell phones and water are not a good match. In fact, you might say water is toxic to a cell phone.  I listen to Pandora on my cell phone when I'm cleaning house.  It makes the time go by faster. Usually when I'm washing the floors, I have the cell phone on a counter or a dresser and move it from room to room as I wash floors. For the life of me, I do not know why I did it this week, but I put the cell phone in my hooded sweatshirt's pocket.  Tuesday when washing the bathroom floors, the cell phone slipped out of the pocket and into the pocket of Pine-Sol water, entirely and completely immersed in it.

I've owned a cell phone for 20 years and this is the first catastrophe I have had with one. And no, I didn't have insurance on it because I prided myself that I took good care of my phone.

Despite attempts to try to dry it out and put it in rice which I read about on the internet, the phone was no longer functional.  I could text but that was about it. I couldn't hear anyone when they called me.

So off to Verizon for a new phone. Thankfully they bought out my old phone that I had just gotten last May and was still on contract with. They upgraded my phone just a bit for a few dollars more a month. Did I get insurance? No. Did I learn my lesson? YES! Thankfully this new one is more water resistant than my other one.

The second lesson I learned this week is a certain grandmother shouldn't put her grandson's Hot Wheel cars in the microwave to hide them and then forget to take one of them out before she starts to use the microwave.  Saturday night the wee one, his sister and mom were over for dinner (son was at work). The wee one usually brings a small red bucket filled with treasures when he comes over here. A few small cars or whatever holds his interest at the time. When he leaves, I make sure what he has brought is back in the bucket. This time he wanted to take all the small Hot Wheels I have over here for him to play with. Not wanting to start a fight with him (yep, I can't say no to him) I let him take the cars and figured I would get them back later in the week since I know he has TONS of cars at his house because I've bought a lot for him and have gotten several big bags of them at Goodwill.

I watched him for a bit on Tuesday and when I picked him up, we filled up his red bucket with Hot Wheel cars. I figured I would keep half of the cars in there and then the next time we got him, I'd fill up the bucket again and do the same thing and that would take care of the amount of cars we have for him here.  I separated the cars I wanted him to take home with him with the ones I wanted to keep here and had the cars I was going to keep here in my hands. I was going to put them up high where he couldn't see them. He was watching a show of his on my tablet and I thought I could get away with it when he was busy watching his show. He looked up as I was walking away with the cars so I quickly put them in the microwave so he wouldn't see them (Out of sight, out of mind).

It worked.  When he got picked up by his dad, I cleaned up all the toys and removed the cars from the microwave. I thought I had removed all of them, but the next day I was cooking TV dinners. We have 2 microwaves; it just works out better. So I had one in one microwave, another TV dinner in the one with the car that I didn't know was in there. I started smelling a strange smell that smelled like burnt plastic, but didn't think too much of it. When it came time to take the TV dinner out, I discovered the now pretty burnt plastic car in the microwave. I was glad it didn't cause a fire. It had melted quite a bit and made quite a mess in the microwave. I threw away that TV dinner as I didn't think it was safe to eat and then had to spend a good 15 minutes cleaning it. Its fine now.

Certainly learned a lesson or two this week. Watch out for what is in the microwave and keep cell phones away from water.

Did you learn anything new this week?
Posted by betty at 9:22 PM 20 comments:

Staying with our goal of trying out different festivals here in the Phoenix area, this weekend we went to the Street Eats Food Truck Festival.  We could have gotten tickets through Groupon but we weren't sure we were going to go or if the weather would be nice (it was only when the sun was out, otherwise it was a bit breezy and cool) so we paid the full price of admission which was $15.00.  Then for each sample of food it was $2.00.  Bit spendy, but again, we are trying to get out and do things and things sometimes cost money.  There were probably about 50 food trucks at the event ranging from desserts, burgers, BBQ, etc. A great variety of food to sample. 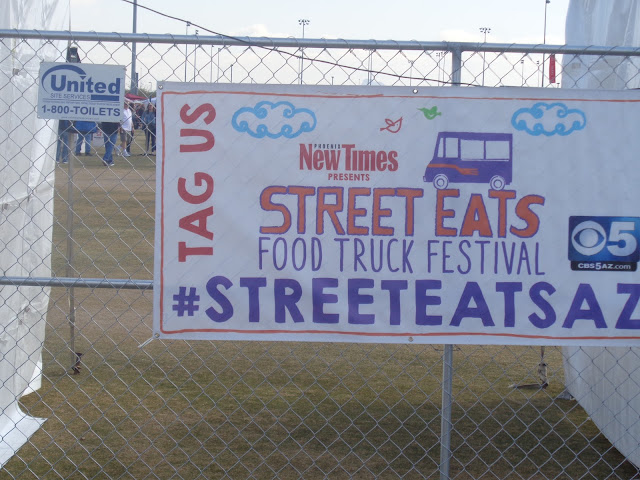 We didn't eat here because it was shaved ice and it was cool out, but I thought it was a cute food truck. 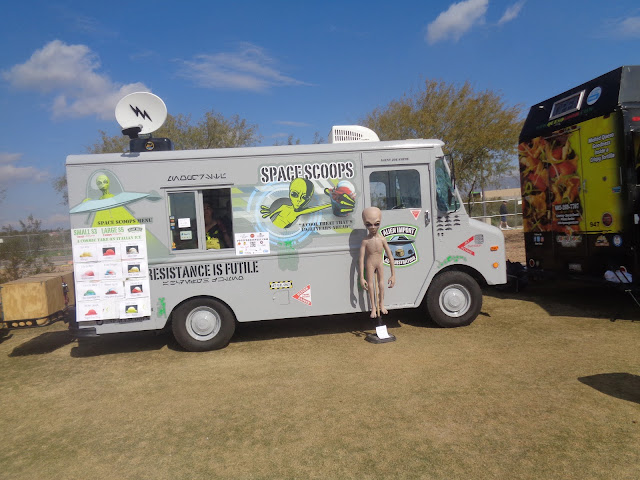 Our first sampling was at Floridino's for pizza muffins. Love pizza.  We opted not to get a sample each which would have been 1 pizza muffin apiece but instead got 5 of them for $7. 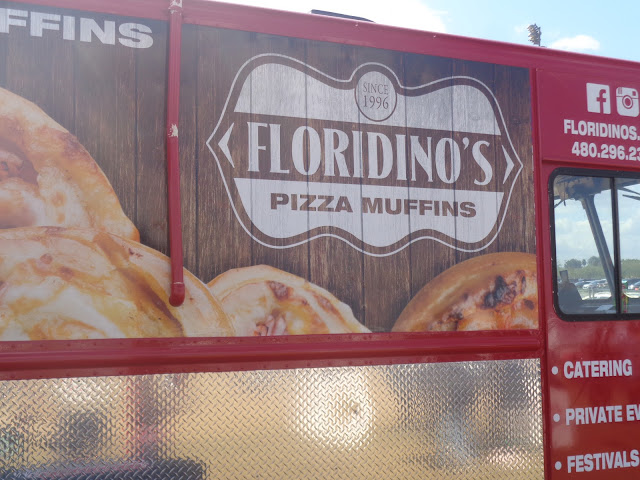 We weren't disappointed. They were delicious. 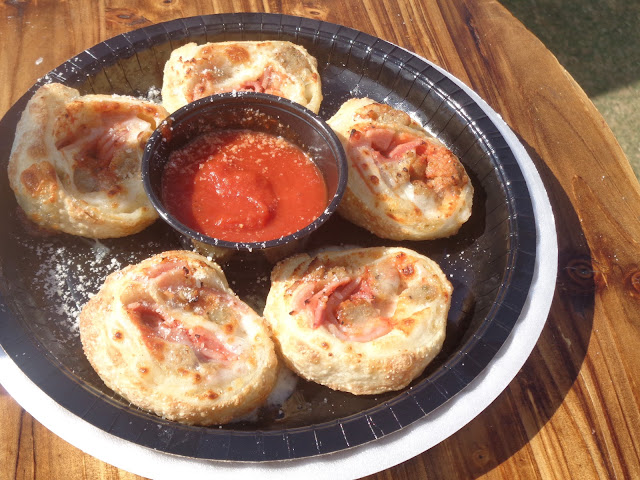 Then we wanted to try fry bread. Never had it before. 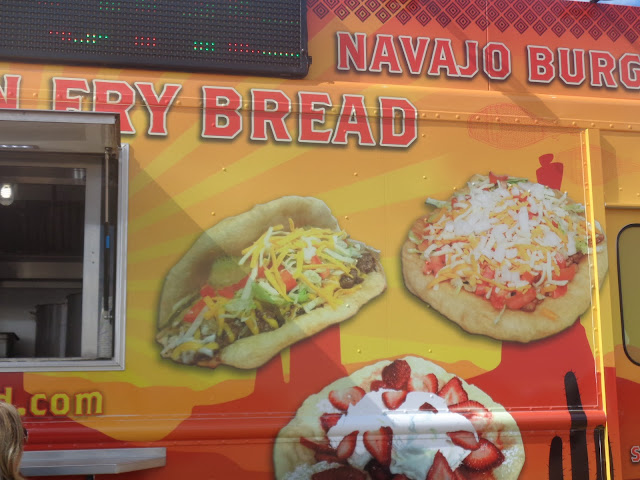 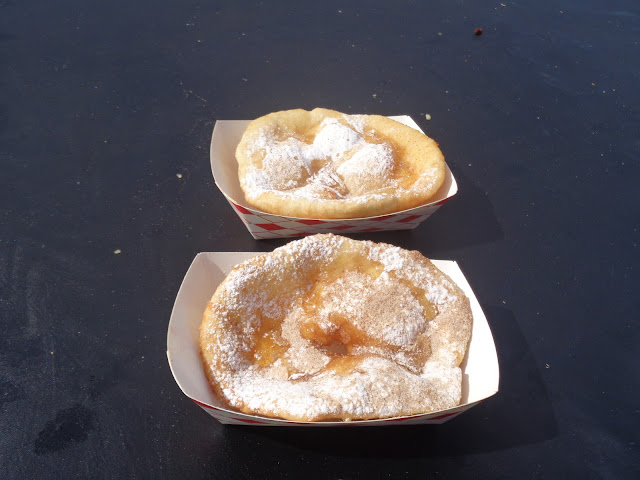 I think Poutine means potatoes because that's what they were featuring. And you know me, I've never met a potato, pasta, or bread that I didn't like. So of course we had to try some. 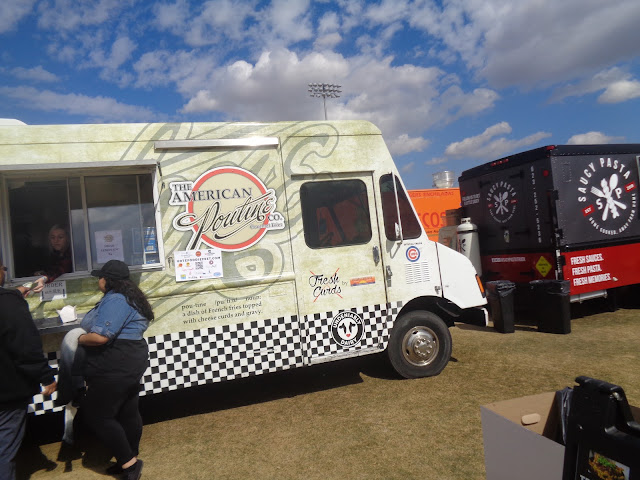 Brown gravy and cheese curds on french fries. Another hit in our opinion. 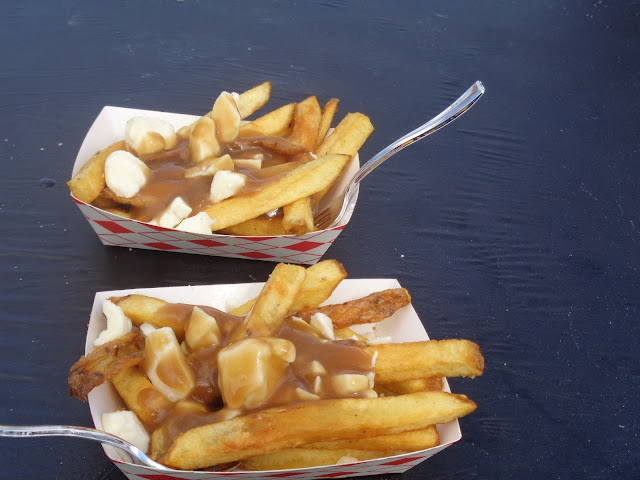 And because I like pasta, of course we had to try this one. 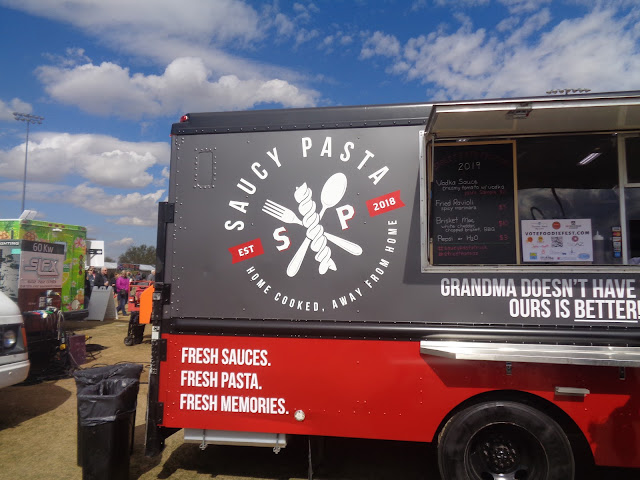 Its advertised as a vodka sauce. Not sure if there's vodka in the sauce or style, but it was tasty. 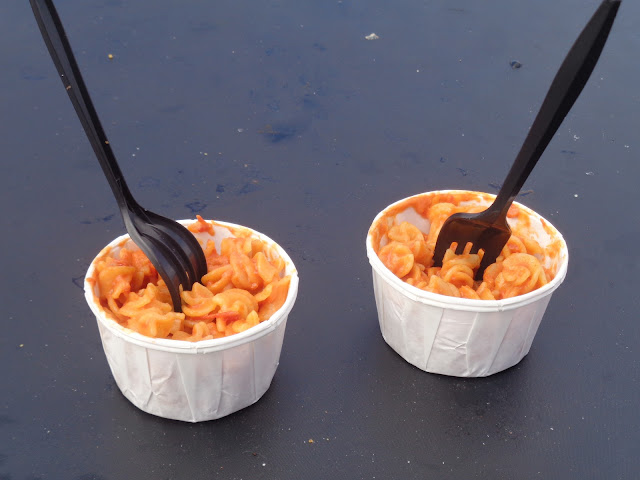 There were about 3 different BBQ food trucks but we decided to try this one. 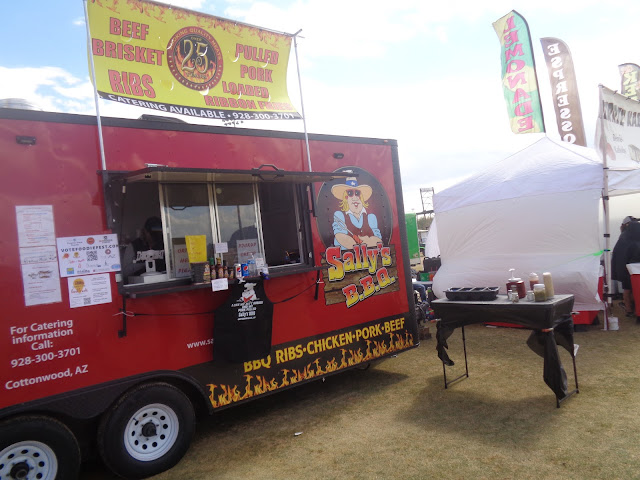 It was pulled pork with their sauce over pasta (yum). This was both of our favorites of the different trucks we sampled. 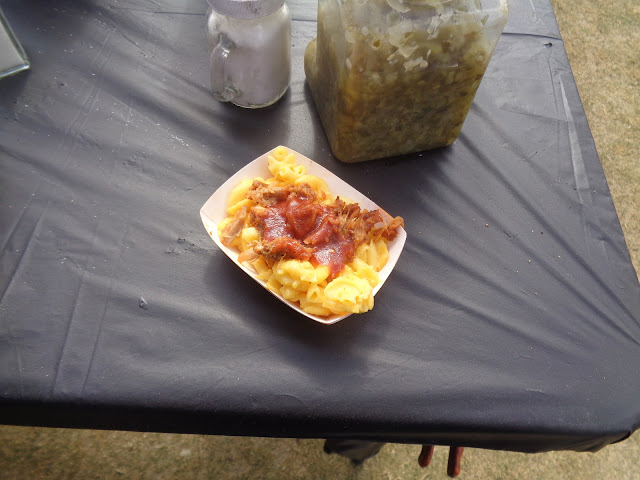 We ended our sampling with a food truck that did grilled cheese sandwiches and then put different meats, etc., on them. We just got the classic to sample which was just grilled cheese. 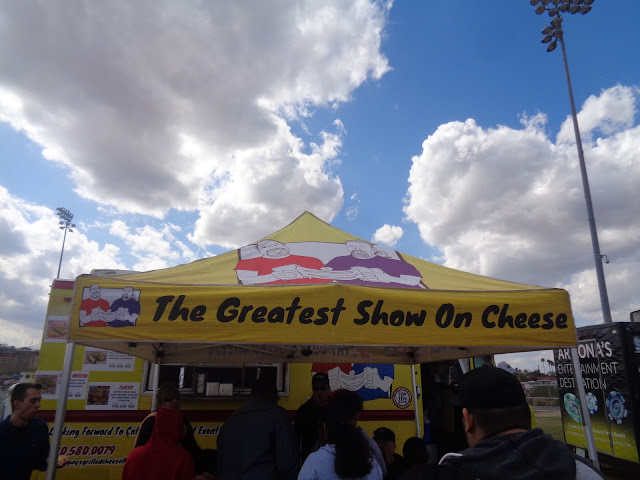 It was very good! 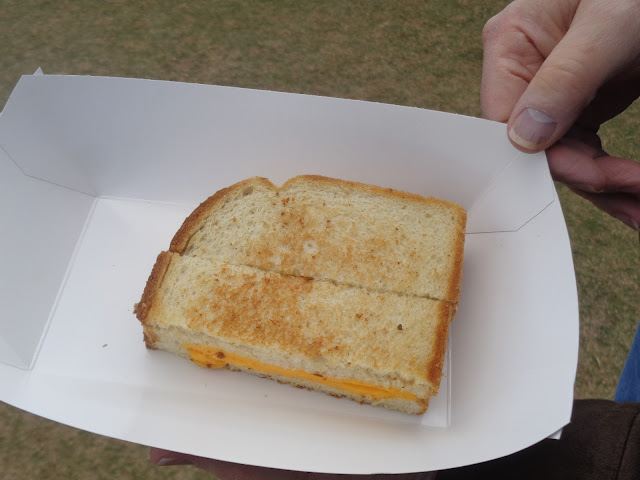 There was also a place giving out free samples of margaritas. Of course we had to get that (imagine shot size glass, that's the size of the sample).

By then we were pretty full. I know the portions don't look super big but they were filling to us.

Stay tuned.  There's a festival we are going to go to next week.  I'm looking forward to that in more ways than one but you'll have to come back and find out why.

Have you eaten food from a food truck before?
Posted by betty at 8:53 PM 23 comments: 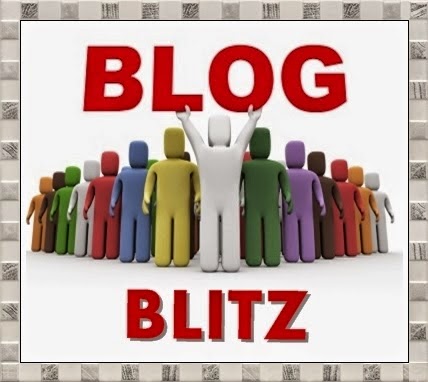 Walk Humbly with My God

Promote Your Page Too 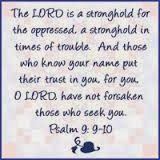